Home  /  Festival of the Vaquillas 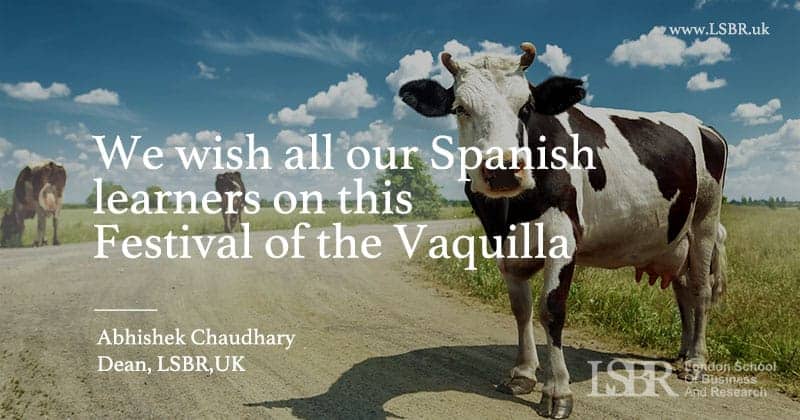 London School of Business and Research, UK wishes all its learners on this Spanish Festival of the Vaquillas

Every year, Colmenar Viejo, in the Madrid region, celebrates this colourful festival of the Vaquillas which commemorates the cattle migration tradition of old.

This festival of the Vaquillas event recreates the driving of the cattle (“vaquillas”) through the streets of the town, but in a uniquely distinctive way. The animals are not real, but artificial, and are created out of structures decorated with coloured silk ribbons, silk shawls and horns which are displayed with great gusto by all the participating groups as they perform a range of dances through the streets. The destination is the town square, where each group makes their calf dance, and simulates charges to display the finery of the decorations to best effect. Then each young calf is returned to where it came from, and its death is symbolised with three shots fired into the air. Limonada (a typical drink of red wine and soda water) is then handed out to all the participants to round off the festivities and to represent the blood of the slaughtered animal.

This is a provincial public holiday. Schools, businesses, and government offices in the province observing this holiday remains closed. In Spain, each province observes two holidays in addition to the holidays of the Autonomous Community and national holidays.  It is also a holiday or observance in: Teruel

London School of Business and Research, UK once again wishes all its learners on this Spanish Festival of the Vaquillas