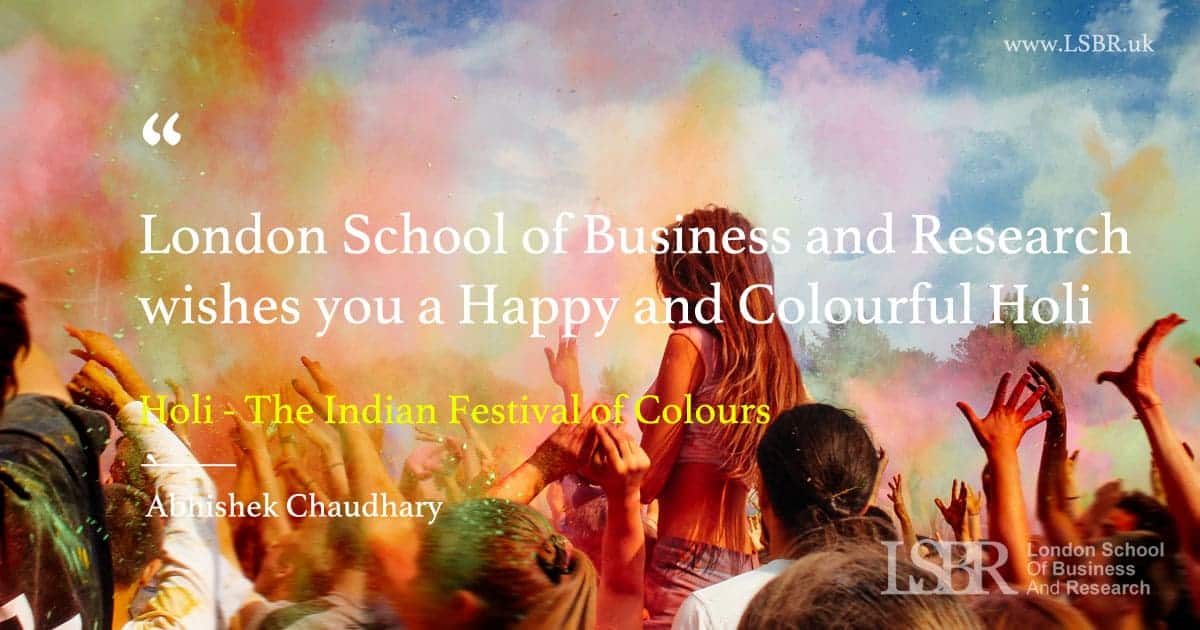 London School of Business and Research (LSBR), UK wishes all of you a Happy and Colourful Holi – the Indian Festival of Colours

Holi is a popular ancient Hindu festival, originating from the Indian subcontinent. It is celebrated predominantly in India, but has also spread to other areas of Asia and parts of the Western world through the diaspora from the Indian subcontinent. Holi is popularly known as the Indian “festival of spring”, the “festival of colours”, or the “festival of love”.The festival signifies the arrival of spring, the end of winter, the blossoming of love, and for many a festive day to meet others, play and laugh, forget and forgive, and repair broken relationships. The festival also celebrates the beginning of a good spring harvest season. It lasts for a night and a day, starting on the evening of the Purnima (Full Moon day) falling in the Vikram Samvat Calendar, in the Hindu calendar month of Phalguna, which falls around middle of March in the Gregorian calendar. The first evening is known as Holika Dahan (burning of demon holika) or Chhoti Holi and the following day as Holi, Rangwali Holi, Dhuleti, Dhulandi, or Phagwah.

Holi is an ancient Hindu religious festival which has become popular with non-Hindus as well in many parts of South Asia, as well as people of other communities outside Asia. In addition to India and Nepal, the festival is celebrated by Indian subcontinent diaspora in countries such as Jamaica, Suriname, Guyana, Trinidad and Tobago, South Africa, Malaysia, the United Kingdom, the United States, Canada, Mauritius, and Fiji. In recent years the festival has spread to parts of Europe and North America as a spring celebration of love, frolic, and colours.

London School of Business and Research (LSBR), UK wishes once again a Happy Holi – The Indian Festival of Colours to all our learners.