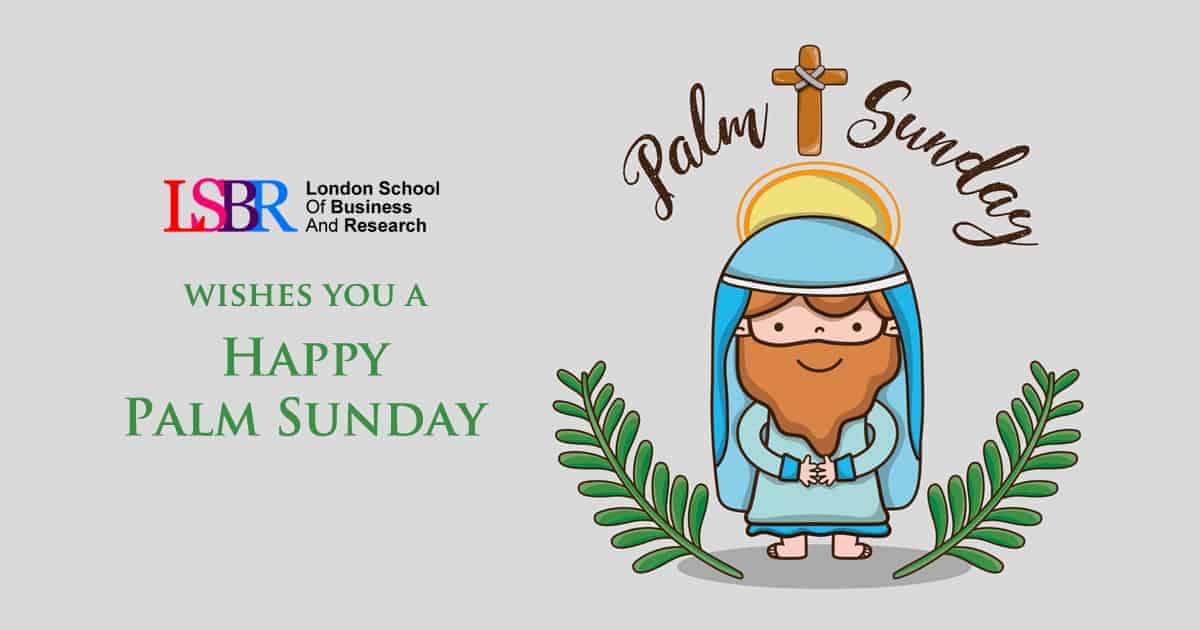 London School of Business and Research (LSBR), UK wishes all of you a Happy Palm Sunday

Palm Sunday is a Christian moveable feast that falls on the Sunday before Easter. The feast commemorates Jesus’ triumphal entry into Jerusalem, an event mentioned in each of the four canonical Gospels.

In most liturgical churches Happy Palm Sunday is celebrated by the blessing and distribution of palm branches or the branches of other native trees representing the palm branches the crowd scattered in front of Christ as he rode into Jerusalem. The difficulty of procuring palms in unfavourable climates led to their substitution with branches of native trees, including box, olive, willow, and yew. The Sunday was often named after these substitute trees, as in Yew Sunday, or by the general term Branch Sunday.

Palm Sunday, or the “Entry of the Lord into Jerusalem” as it may be called in Orthodox Churches, is one of the Twelve Great Feasts of the liturgical year. The day before Happy Palm Sunday, Lazarus Saturday, believers often prepare palm fronds by knotting them into crosses in preparation for the procession on Sunday. The hangings and vestments in the church are changed to a festive colour – most commonly green.

In ancient times, palm branches symbolised goodness and victory. They were often depicted on coins and important buildings. Solomon had palm branches carved into the walls and doors of the temple (1 Kings 6:29). Again at the end of the Bible, people from every nation raise palm branches to honour Jesus (Revelation 7:9).

It is customary in many churches for worshippers to receive fresh palm leaves on Palm Sunday. In parts of the world where this has historically been impractical, substitute traditions have arisen.

London School of Business and Research (LSBR), UK wishes once again a Happy Palm Sunday to all our learners.