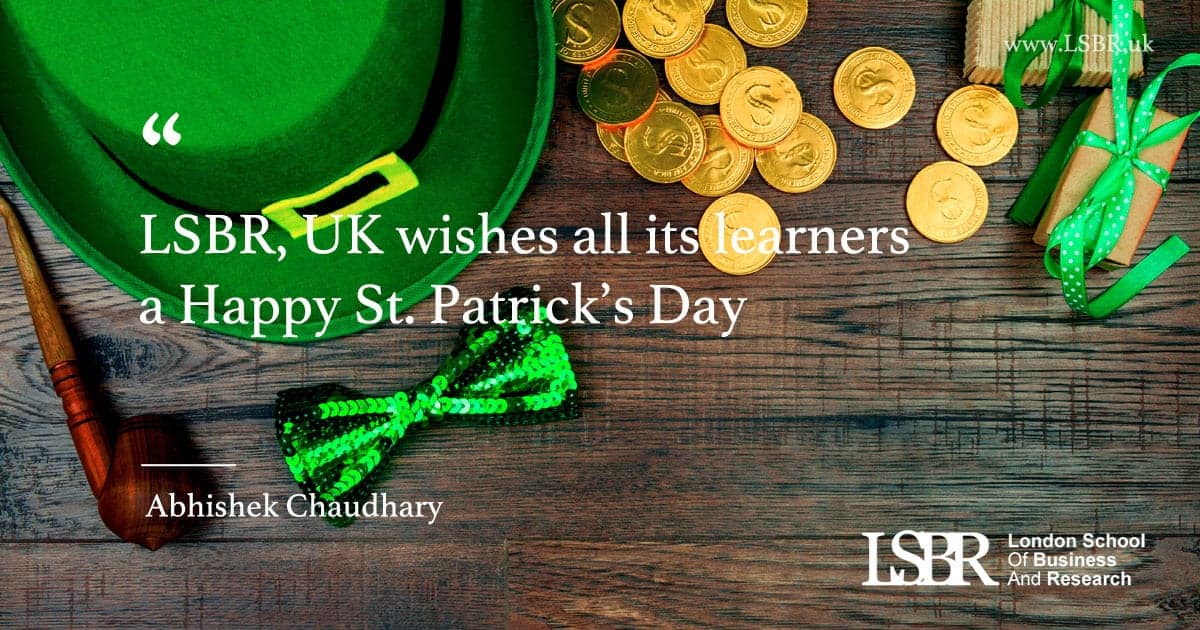 London School of Business and Research (LSBR), UK wishes all of you a Happy Saint Patrick’s Day

Saint Patrick’s Day was made an official Christian feast day in the early 17th century and is observed by the Catholic Church, the Anglican Communion (especially the Church of Ireland), the Eastern Orthodox Church, and the Lutheran Church. The day commemorates Saint Patrick and the arrival of Christianity in Ireland, and celebrates the heritage and culture of the Irish in general.

Happy Saint Patrick’s Day celebrations generally involve public parades and festivals and the wearing of green attire or shamrocks. Christians who belong to liturgical denominations also attend church services and historically the Lenten restrictions on eating and drinking alcohol were lifted for the day, which has encouraged and propagated the holiday’s tradition of alcohol consumption.

According to tradition, Patrick returned to Ireland to convert the pagan Irish to Christianity. The Declaration says that he spent many years evangelising in the northern half of Ireland and converted “thousands”. Patrick’s efforts against the druids were eventually turned into an allegory in which he drove “snakes” out of Ireland, despite the fact that snakes were not known to inhabit the region.

Tradition holds that he died on 17 March and was buried at Downpatrick. Over the following centuries, many legends grew up around Patrick and he became Ireland’s foremost saint.

London School of Business and Research (LSBR), UK wishes once again a Happy Saint Patrick’s Day to all our learners.